Essentially all the sounds that we hear are the result of vibrations in the air around us.  For practical purposes we limit our study of speech to the sounds that are made when air is expelled from the lungs and is modified in various ways as it moves upward and out of the body. The vocal cords in the larynx provide the basic vibration in the air stream, which is further modified above the larynx in the vocal tract. There are two kinds of modification: the vocal tract can be shaped in different ways so that air vibrates in different patterns of resonance, or the air stream can be obstructed, wholly or partly, in different places.
1. THE HUMAN VOICE
Human speech is very much like the playing of a wind instrument. Different speech sounds, in any language, are made by moving a column of air through part of the upper body and creating various kinds of vibration and noise as the air moves. It is possible to use air that is drawn into the body from outside (try to say ‘Yes’ while inhaling). A more familiar way of using ingressive air for sound-production is to produce a click, such as the tongue-tip noise which we represent as tsk-tsk, or the clucking sound that is sometimes used in getting a horse to move. To produce such clicks we create a vacuum in the mouth, then open suddenly so that air rushes in. Another way of producing an air stream is to gather a quantity of air in the throat and then eject it all at once. In almost all of our speaking, however, we use a column of air which moves up from the lungs and out the mouth or the nose or both together, and we modify the air in its passage. Everything that we say about speech sounds from here on will assume the use of egressive lung air.
All of the vocal organs have other functions – breathing, sucking, chewing, swallowing. The lungs expand and contract to bring in air or let it out. Air expelled from the lungs travels up the trachea, or windpipe. At the top of the trachea is a structure of cartilage known as the larynx, or voicebox. The primary vibration needed for speech is produced in the larynx by the vocal cords, which are described in the next section. Above the larynx are three interconnected areas, the pharynx, the nasal cavity, and the mouth (or oral cavity) which serve as resonance chambers. The three together are called the vocal tract. 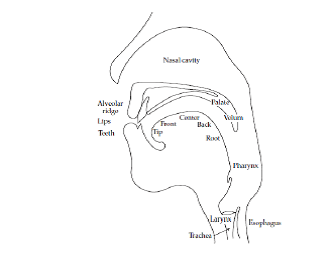 We can summarize the functions of these vocal organs this way: The lungs supply the basic force which is needed (initiation). The vocal cords furnish the basic vibration (phonation). The three resonance chambers are maneuvered in various ways to produce sounds of different quality (articulation). In general, variations in the force with which air is expelled from the lungs results in differences of intensity or loudness in speech sounds. Variations in the frequency of vibration of the vocal cords are responsible for variations in pitch, or tone. Variations in the shape of the vocal tract are related to different speech sounds. In theory, then, loudness, pitch, and articulation are separate from one another. In reality, these things go together. In an English utterance the parts which are more prominent than others are generally louder, higher in pitch, and have certain special articulatory characteristics. Most notably, the prominent parts have greater duration.