There are several reasons for using role-play in the classroom and some tips for getting the most out of role-play.
Introduction
Incorporating role-play into the classroom adds variety, a change of pace and opportunities for a lot of language production and also a lot of fun! It can be an integral part of the class and not a ‘one-off’ event. If the teacher believes that the activity will work and the necessary support is provided, it can be very successful. However, if the teacher isn’t convinced about the validity of using role-play the activity “will fall flat on its face just as you expected it to” (Gillian Porter Ladousse 1987). Therefore, if you think positive and have a go, you may be pleasantly surprised!
What is role-play? Role-play is any speaking activity when you either put yourself into somebody else’s shoes, or when you stay in your own shoes but put yourself into an imaginary situation!
Imaginary situations – Functional language for a multitude of scenarios can be activated and practised through role-play. ‘At the restaurant’, ‘Checking in at the airport’, ‘Looking for lost property’ are all possible role-plays.

Why use role-play?  It is widely agreed that learning takes place when activities are engaging and memorable. Jeremy Harmer advocates the use of role-play for the following reasons:

In addition to these reasons, students who will at some point travel to an English-speaking country are given a chance to rehearse their English in a safe environment. Real situations can be created and students can benefit from the practice. Mistakes can be made with no drastic consequences.

The role of the teacher Some of the possible teacher roles are:
Bring situations to life Realia and props can really bring a role-play to life. A group of young learners recently played the roles of pizza chef and customer. A simple cone of white card with CHEF written on it took a minute to make and I believe it made the whole process more fun and memorable for the class. As soon as it was placed on their heads they ‘became’ the pizza chef and acted accordingly.
Rearranging the furniture can also help. If you are imagining you are at the tourist information office or at the doctor’s surgery try to make it as real as you can. Students can even leave the room and make an entrance by knocking on the door.

Error Correction
There are many ways to correct mistakes when using role-play. It is rarely appropriate for the teacher to jump in and correct every mistake. This could be incredibly demotivating! Some students do like to be corrected straight after a role-play activity, while the language is still fresh in their minds. Sentences with errors can be written on the board for the group to correct together.
Use your imagination and have fun
The most successful role-play I did last year was with a group of teenagers and was used as a spring board activity after listening to a song. The song was Avril Lavigne´s Skater Boy. The class worked in pairs to act out the scene of Skater Boy finally getting to meet his ex-girlfriend after the concert. The results were humorous and I was surprised that they all really got into the roles they played.
Samples and Models of Role play
Topic: SHOPPING 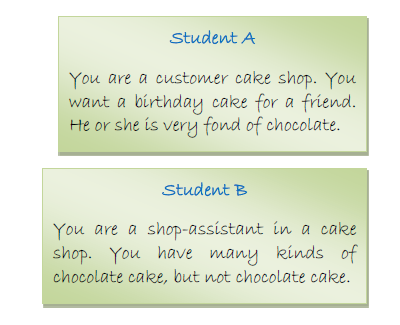 Definitions of game
According to Haldfield (1999): “A game is an activity with rules, a goal and an element of fun… Games should be regarded as an integral part of the language syllabus, not as an amusing activity for Friday afternoon or for the end of the term.” This definition highly evaluates the importance of games in teaching. It adds to teachers’ techniques I teaching that games serve not only as an ‘amusing activity’, but as a technique to carry out tasks to learners amusingly as well. Haldfield (1999) adds: “Games can be used at all stages of the progression from controlled to free practice, serving at one end of the range as a memory aid and repetition drill, at the other as a chance to used the language freely and as a means to an end rather than an end in itself. They can also serve as a diagnostic tool for teacher, who can note areas of difficulty and take appropriate remedial action.” Haldfield further emphasizes the effective use of games. Students are always lazy to do the tasks.
Lee (1991: 3) defines: “Games in the stick sense, which have a definite beginning and end, are governed by rules…” Similarly, Hadfield (1990) defines games as “an activity with rules, a goal and an element of fun.”
Games are not carried in chaos. Games have the rules, and for it is necessary players to digest these rules before the start so that they can play the games smoothly without committing them.
According to Greenall (1990: 6), “The term ‘game’ is used whenever there is an element of competition between individual students or teams in a language activity.” When appears ‘an element of competition’, all above rules are most needed. Besides, games are, in this case, emphasized to encourage students’ solidarity in teamwork in which they have to try their best to do the tasks or maybe to code any requirements given in the games for their team spirit.
Therefore, games comprise many factors such as rules, competition, relaxation, and learning. The main focus of using game in class is not only to help students to learn more effectively but also to have fun.

Sample of English Games for Kids

Move and Find
A student is asked to leave the room for minute whereas the other students move something in the classroom to different place/position. Then he/she is asked to comeback into the classroom and guess what has been moved/put.
An example:
Jean: Did you put marker on my table?
Ss:      No, we didn’t.
Jean: Did you move teacher’s table to the corner
Ss:      Yes, we did.

Note: If the student can find the item, he/she gets the point and then turn to an
other student.

Songs as Practice Material
Song can be used in a lot of various ways (see 3.4.4). All the skills such as listening, reading, writing and speaking can be practised, the same way as linguistic areas starting with vocabulary, grammatical structures, and ending with rhythm, stress, fluency and pronunciation.
The rhythm of the verse helps the learner to put the stress in the right places, creating a natural flow of language and building up fluency. At the same time the presence of rhyming words and such poetic device as alliteration13 and onomatopoeia14 help to focus on certain sounds, thus giving valuable ear-training and help in pronunciation. In the syntactical area a song gives us the opportunity to repeat the same structural item many times, thereby aiding correctness and fluency of expression. (Sheila Aristotelous Ward, p. 7)
Songs are also “especially good at introducing vocabulary because they provide a meaningful context for the vocabulary”. However, it depends on the choice of songs since there are also some songs without meaningful context. From the grammatical point of view, they “provide a natural context for the most common structures such as verb tenses and prepositions” (D. T. Griffee, pp. 5, 6).
The Help Of Songs When Learning Pronunciation
Songs can be very helpful as far as learning pronunciation is concerned. They provide the authentic language with all its „traps“ (such as connected speech, different pronunciation of the same sound, or difficult pronunciation of some words) laid for learners, who should be exposed to it as much as possible to strengthen their ability to understand it. In the following subsections we will concentrate on three areas of difficulties in pronunciation (sounds, words, connected speech), and on explaining why songs can be useful when the learners are caught into these “traps of language”.
The Help of Songs Focused on Words
“Words are combinations of sounds which form together to give meaning. A word is uttered in syllables, usually one emphasized syllable (the stress) and the rest weak (unstressed)”. (ibid.).
There are both several difficulties and several ways songs can support practicing these problems. “Words in songs fit the music, helping learners associate the number of syllables / stress in these words, with memorable rhythms. Songs contain endless examples of weak syllables, helping to convince learners of the way English is pronounced” Songs help learners practice the described subject matters because they“ provide real and ‘catchy’ examples of how whole phrases are pronounced often to the extent that students find it difficult to pick out individual words. The music further emphasizes the ‘flow’ of the words. Moreover, songs, like other spoken texts, are full of contractions”
What Can We Do With A Song In Language Teaching?
Automatic usual and simple answer to this question could be: “A word-gapfill.” However, the answer is not so single valued. And hopefully, the following selected list of Tim Murphey (and references to other sources of activities) will be convincing enough to prove that the answer can be much longer.
What can we do with a song in lesson?
1) Listen
2) Sing, whistle, tap, and snap fingers while we listen
3) Sing without listening to any recording
4) Talk about the music
5) Talk about the lyrics
6) Talk about the singer / group
7) Perform songs
8) Write articles
9) Study grammar
10) Practice selective listening comprehension
11) Translate songs
12) Write dialogues using the words of a song
13) Do role-plays (as people in the song)
14) Dictate a song
Samples of English songs for Kids