Phrase Structure Rules and the Lexicon

Formal versus informal grammars
o  A formal grammar is a scientific model of a language which describes what is and is not a grammatical (well-formed) sentence. It attempts to represent what a speaker of the language knows about its structure; this knowledge knows about its structure; this knowledge also called a GRAMMAR.
o  A formal grammar is a model of a speaker`s internal grammar. Formal grammars are different from the books that you have usually seen called `grammars`, such as foreign language textbooks. These could be called INFORMAL GRAMMARS. They are usually easier to understand than formal grammars, but are usually less precise.
o  Formal grammars attempt to represent a speaker`s internal grammar much more accurately and in more detail than is usually done in informal grammar. Since one goal of a book is to help you think clearly and precisely about languages , it makes use of formal grammars as tools for describing languages.
o  The details of formal grammars are based on a family of related linguistic theories which are collectively called GENERATIVE GRAMMAR.
o  Generative grammar conceives of a language`s grammar as a precise set of rule  that specify which utterances are grammatical in a language and which are not.

Most generative  grammars represent the structure of a sentence in the form of a tree, as we have been doing. The portion of a generative grammar which is responsible for building such as a tree is often called the BASE COMPONENT and consists of two parts; the PHRASE STRUCTURE RULES and the LEXICON. 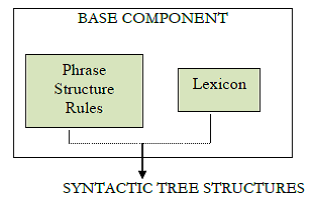