5.1   Obliques
v  Obliques are any of the phrases within a clause other than the subject, direct object, direct object, indirect object, or verb.
v  Obliques usually express a wider range of meanings than do subjects and objects. Some express secondary characters.
(1)   BENEFACTIVE
He opened the door[for the small children].
Many nations provided funding [for the Persian Gulf war].
(2)   ACCOMPANIMENT
He ate dinner [with his guests].
Why don’t you come [with me]?
He missed the dirt [with the manure].
(3)   INSTRUMENT
Many people have learned to eat [with their fingers].
The mill will not grind [with water that is past].
We make a living [by what we get], but we make a life [by what we give].
Let’s go [on foot].
Others express setting.
(4)   TIME
He awoke [late the next morning].
It has been too hot[the whole week].Most successful sales come [after the fifth  call].
(5)   LOCATION (of an object or an entire event)
He saw the dog[over there].
Little mice sat [on a teapot].
(6)   SOURCE (starting point)
He came [from Alabama].
Please take that silly hat [off your head].
(7)   PATH
They passed [through many twisted corridors].
One if [by land], two if [by sea]…
(8)   GOAL (endpoint)
He ran [to the back of the room].
I’ll put the letter [on your desk].
Other obliuqes express abstract qualities characteristic of the event or of the speaker’s attitude towards the event.
(9)   MANNER
[Very slowly], she backed out of the cage.
Sergeant pepper dismantled th bomb [with great care].
[Unfortunately], we cannot retain your services.
5.2    Prepositional and postpositional phrases
v  The structure most used for obliques is a noun phrase combined with a PREPOSITION (such as under) to form a PREPOSITIONAL PHRASE (PP), such as under the table. Conversely, the most common use of PPs is as obliques, although we have also seen them used as possessors, indirect objects, and even direct objects. 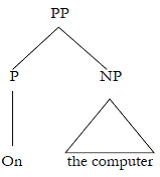 5.4   The Distribution of Obliques
Obliques can occur outside of objects if they occur on the same side of the verb, the object will be closer to the verb than the obliques. Wherever they occur, the relative order  of the obliques to each other is usually free, while the order of subject, verb and objects is often more fixed.
(13)   a.   I went to sleep in phonology class  this morning.
b.   I went to sleep this morning in phonology class.
c.   *went to sleep I in phonology class this morning.
(14)   a.   I was studying grammar with some friends until two in the morning.
b.   I was studying grammar until two in the morning with some friends.
c.   *I was studying with some friends grammar with until two in the morning
For English we could write a VP rule like the following:

In English, obliques can also occur in front of the subject.
(16)   Last night, I studied too long
Also, some obliques can occur just before the main verb.
(17)   I was gradually walking up, when I realized how late it was.
5.5   Complement versus adjuncts
Most obliques serve as modifiers within the clause and most obliques can freely occur with all types of verbs.
Complements are phrases that are required by particular verbs.
Adjuncts are phrases that freely occur with all verbs.
Most obliques are adjuncts, but not all are. Obliques expressing Source, Path, and Goal, in particular, are required by some verbs and cannot be used with others. The distinction is also sometimes applied within a noun phrase: the possessor is a complement, and the modifiers are adjuncts.
(18)   a.   Polly put the kettle on the table.
b.   *Polly put the kettle.
(19)   a.   In a rage, Arthur killed the pesky fly.
b.   *in a rage, Arthur killed the pesky fly to the wall. 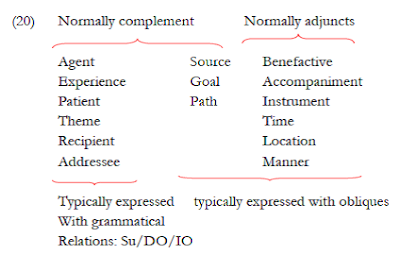 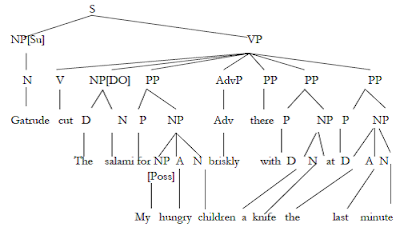 v  The most obliques can freely co-occur with all types of verbs, unlike direct and indirect objects. Recall that some verbs are intransitive (they can’t have objects), some are ditransitive (they require two objects), etc. In contrast to this, the presence of most obliques is neither ruled out nor required by any verb.
v  Thus, a basic distinction is usually drawn between those phrases that are required by particular verb, called COMPLEMENTS, and other phrases that freely occur with all verbs, called ADJUNCTS.
v  The complements (such as direct and indirect objects) are those phrases that a verb subcategorizes for; all others are adjuncts.
v  Most obliques are adjuncts, but not all are. Obliques expressing Source, Path, ND Goal, in particular, are required by some verbs and cannot be used with others.
Ingin mendapatkan eModul + Power Point Lengkap? Silahkan KLIK DI SINI  dan pilih eModulnya.