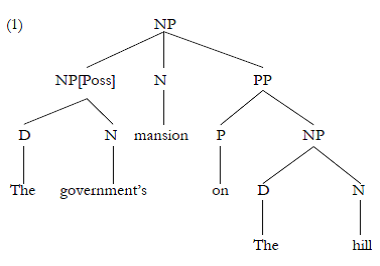 Besides embedding, there is another way of combining constituents, called CONJOINING. Conjoining links together two constituents of the same type, to make another constituent of the same type. It connects them with words like and and or, which are traditionally called CONJUCTIONS. For example, the following sentences consists of two conjoined independent clauses. The two clauses, when conjoined with and, form a larger clause.
(4)   [s [s John sings] and [s Mary plays the piano]]
They are both considered to be  independent clauses, because they have the right structure to stand alone as main clauses.
Two dependent clauses can also be conjoined. In the following, two complement clauses have been joined into a larger complement clause which is the direct object of the main clause.
(5)    I believe [ [ that he is guilty ] and [ that they will convict him ] ].
The higher S is called the UPSTAIRS or MATRIX clause; the lower S is called the DOWNSTAIRS or embedded clause. 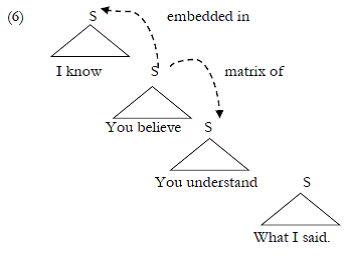 8.3   Complement clauses
A complement clause occurs embedded as the subject or direct object of another clause. Consider the following sentences, in which the complement clauses are bracketed.
(7)   a. [ That John kept practicing so long ] surprised me.
b. She thought [ that Bill brushed his teeth with garlic sauce ].
The words which introduce complement clauses are called COMPLEMENTIZERS. There are several different complementizers in English: that is the clearest example. Linguists generally assign complementizers to a minor category called C, which joins together with an S to form a constituent called S’ (read ‘S-PRIME’) sometimes you will see S (‘S-BAR’) in place of S’. the embedded clause is functioning as subject or direct object within the matrix clause. Grammatical relations can be represented with the same features [Su] and [DO], but they are attached to the S’ node, rather than an NP. 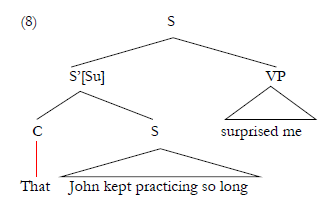 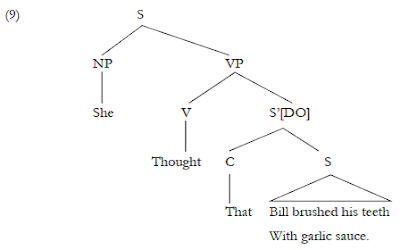 8.4   Oblique clauses
Oblique clauses are embedded clauses which are obliques within their matrix clauses. Along with PPs, AdvPs, NPs, etc., they are used to express typical oblique notions such as time, location, and manner. Consider the following sentences, in which the oblique clauses are bracketed:
(10)
a.       My heart goes [where the wild goose goes]
b.      John will leave [when he finishes breakfast]
c.       [Having win the battle], Caesar marched into Rome triumphantly.
d.      [If John keeps practicing], he’ll be famous.
e.       [Because Mary kept practicing so faithfully], she did become  famous.
f.        [Although John kept on practicing faithfully], he did become famous.
g.       Be quiet [so that you can get an ice cream cone].
For example, we might draw the following tree to show a clause embedded in the VP as an oblique. 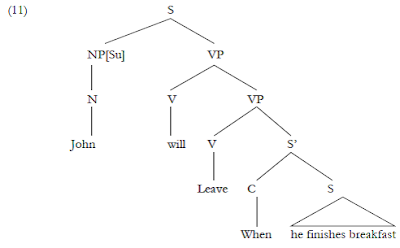 Note that the category C includes words such as when, where, if, and because, even though these would traditionally be called ‘subordinating conjunctions’ rather than complementizers. C is used for any particle that introduces a clause, because all such particles (regardless of their traditional labels) share the property if intro
ducing an embedded clause. All of these ideas can also be expressed by PP obliques.
(12)   a. Condition:      In case of fire, you should run and holler, scream and shout.
b. Purpose:        He pulled the fire alarm just for fun.
c. Reason:          He paid a heavy fine for his stupidity.