Consider a word like ‘kickers’, it contains two suffixes, one derivational (-er), the other inflectional (-s). strip both affixes off and you are left with kick, which we call a ROOT. Add back on the derivational suffix –er and you get kicker, we call the STEM. 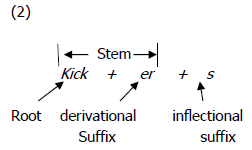 A root is always a single morpheme. A stem on the other hand, may consists of more than one morpheme. Many stems, like cat consists of only a single root. The stem and the root are identical.

other stems consists of two or more roots, as in view-point. Neither view nor point is an affix and both are single morphemes. So they are both considered to be roots.

A stem containing more than one root is called a COMPOUND STEM or simply a COMPOUND; the process of forming such stems is called COMPOUNDING.
Compounding may, in some cases, involve derivational affixes too, as in rabble-rouser-r; this stem consists of two roots plus a derivational suffix.

and stem may contain more than one derivational affix, as in interlinearizer (a type of computer program that is used by linguists for inserting interlinear word-by-word or morpheme-by-morpheme glosses in a text)

thus, a stem consists of one or more roots, plus zero or more derivational affixes. A root, in contrast, is always a single morpheme.
All stems serve as the base to which inflectional affixes attach. So, for example, all the nouns mentioned above have plural forms.
(7)
a.   cat-s
b.   kicker-s
c.   viewpoint-s
d.   rabble-rouser-s
e.   interlinearizer-s

virtually all roots are also stems and the simplest stems (those consisting of only one morpheme) are also roots. 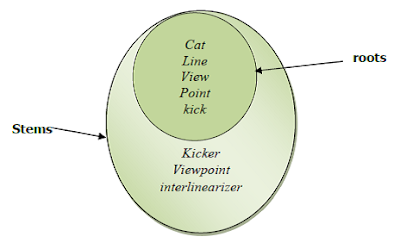